Severe Acute Respiratory Syndrome Coronavirus 2 (SARS-CoV-2) has caused a new coronavirus pneumonia pandemic that has posed a huge threat to people's health and economies worldwide since the outbreak last year. According to the World Health Organization, as of 6:30pm (CET) on July 30, 2021, there were 196,553,009 cumulative confirmed cases and 4,200,412 cumulative deaths worldwide. After more than a year of efforts, the NCC epidemic in China has been effectively controlled, with only occasional localized sporadic cases emerging. But the war against Neoplasia is still far from over. The recent importation of the delta mutant strain from abroad has spread rapidly in several provinces and cities in China, causing more than 300 infections in just a few days, which reminds us that we still cannot take it lightly.

In order to contain the spread of the epidemic, countries around the world are pushing hard to vaccinate against neo-crown. In addition to vaccines, neutralizing antibodies are also a powerful weapon in our fight against neo-coronaviruses. As the COVID-19 epidemic continues worldwide, various variants of the virus have emerged. These variants spread faster and have a greater ability to spread and have rapidly replaced the original strain as the main prevalent strain today. These variants are able to escape a variety of existing neutralizing antibodies due to the accumulation of a large number of mutations in the RBD region. This further increases the difficulty of outbreak prevention and control. To address this problem, Biosatu has developed a variety of neo-crown neutralizing antibodies with different epitopes and collaborated with Shuimu BioSciences and Wang Hongwei's group in the School of Life Sciences at CPS and Tsinghua University to reveal the potent neutralizing ability of these antibodies against a variety of neo-crown variant strains and the structural basis behind them. The related work, titled Three epitope-distinct human antibodies from RenMab mice neutralize SARS-CoV-2 and cooperatively minimize the escape of mutants, was recently published in the Nature subjournal Cell Discovery. 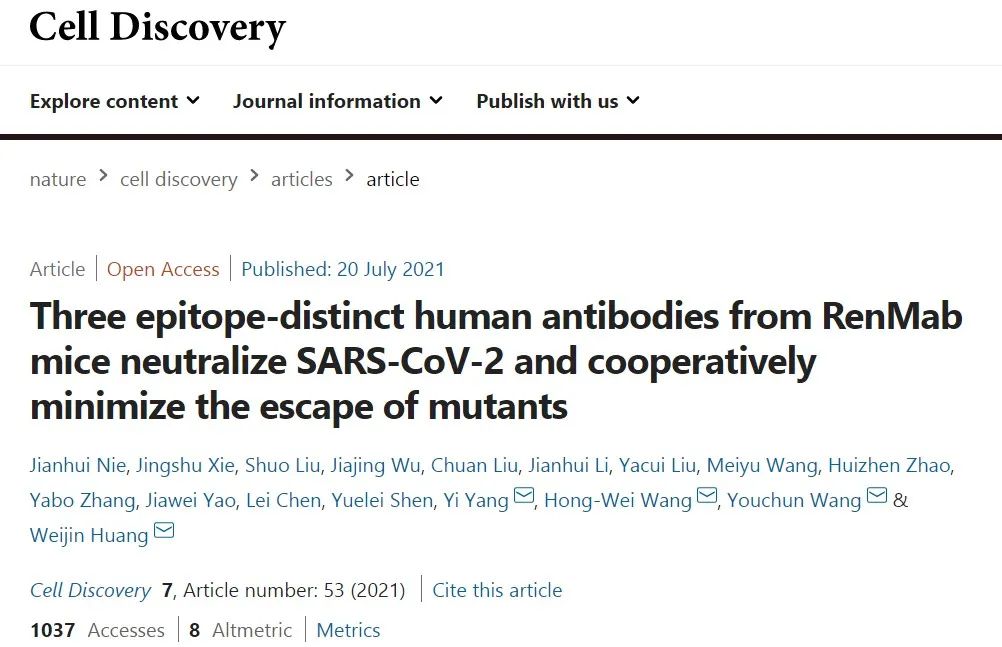 The researchers first immunized RenMab mice using recombinantly expressed RBD of SARS-CoV-2 as an antigen, from which they screened 10 high-affinity neutralizing antibodies that effectively blocked the binding of ACE2 to RBD.

A recent study showed that antibodies of the IGHV3 family were significantly enriched in RBD-specific antibodies. Six of the 10 antibodies screened by the researchers were all from the IGHV3 family, while the other four were from the IGHV4 family, which is also consistent with the IGHV3 preference previously reported for new crown neutralizing antibodies. These 10 antibodies were classified into 4 categories according to their binding epitopes to RBD, with 10D12/2H10/10F9/9A8/1F9 belonging to Bin1, 4E5/2F7 to Bin2, 7B8 to Bin3, and 9G11 and 8G6 to Bin4. The epitopes of Bin2, Bin3 and Bin4 do not overlap each other. The order of neutralizing activity of these 10 antibodies against the virus was 10D12 = 10F9 > 7B8 = 9G11 > 9A8 > 2H10 > 1F9 > 4E5 > 2F7 > 8G6.

Since the neutralizing activity of the antibodies belonging to Bin2 was weak, the researchers selected three antibodies, 10D12, 7B8 and 9G11, for subsequent cryoelectron microscopic structure resolution. Shuimu BioSciences resolved the cryo-electron microscopic high-resolution structures of the complexes formed by the Spike protein trimer with 10D12 full-length IgG, 7B8 Fab fragment and 9G11 Fab fragment, respectively. 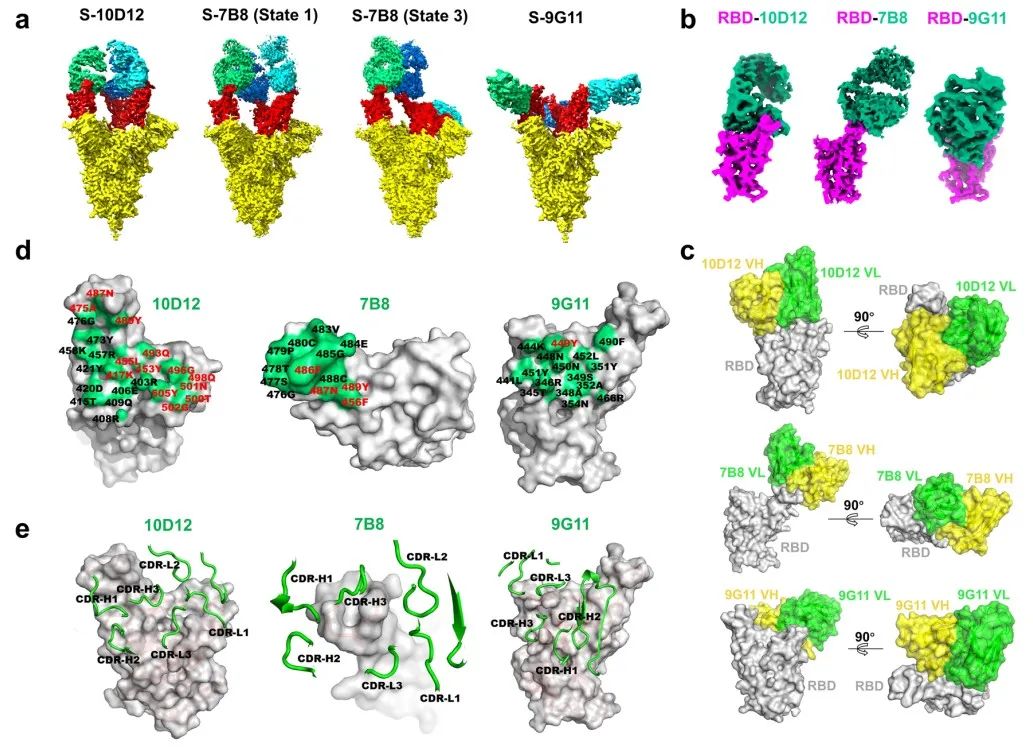 The researchers examined the neutralizing activity of the three aforementioned antibodies against different mutant strains of the new coronavirus. 10D12 antibody epitope had the highest overlap with the binding site of ACE2, so the most point mutations were able to escape 10D12, including the notorious N501Y and K417N.

The epitopes of 7B8 and 9G11 overlap less with ACE2, so point mutations have relatively little effect on these two antibodies. In addition to the single point mutation, B.1.1.7 (the UK mutant strain) also escaped 10D12, but not 7B8 and 9G11. This suggests that differences in antibody epitopes can greatly affect the neutralizing activity of antibodies against viral variants. 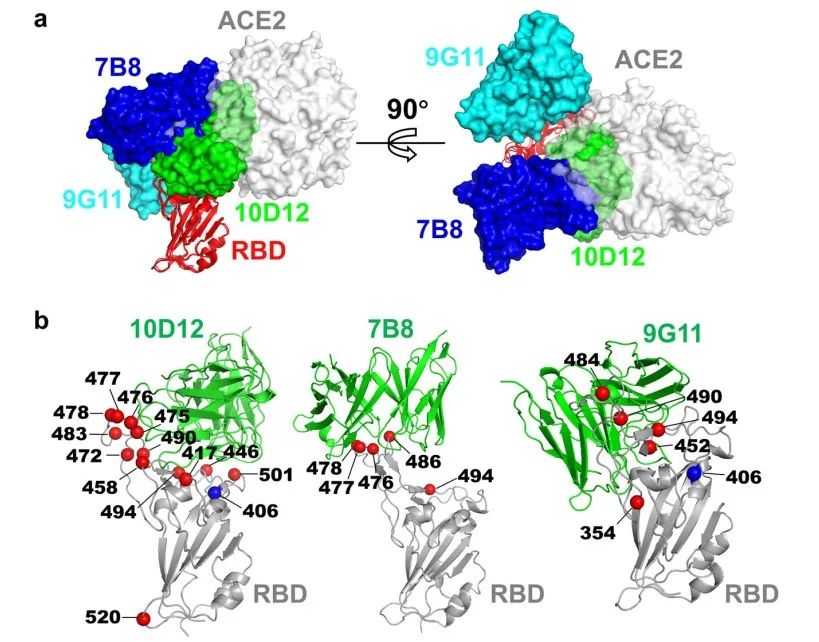